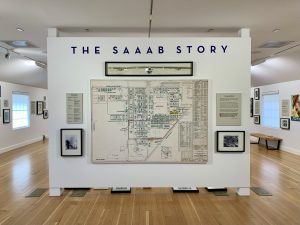 Located on the second floor of Heroes Hall

The SAAAB (Santa Ana Army Air Base) Story exhibition celebrates the history of the flight training center, its contribution to the war effort, the airmen that served here and its role in the development of the growth of Orange County through film, photographs, maps, oral histories, works of art, and ephemera.

The air base’s location once included the land on which the OC Fairgrounds now sits, and Heroes Hall’s building is a renovated barracks from the base. The exhibit first debuted when Heroes Hall opened in 2017 but has been updated with several new artifacts and pieces of memorabilia. 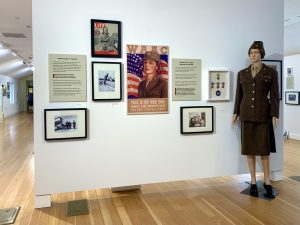 • Women, Latinos and LGBTQ service members in the military during World War II
• Letters sent from 8th graders who were held in internment camps to their white classmates in Westminster
• German POWs who worked on the base picking oranges
• Tuskegee Army Air Field, which is where the Black airmen who would have trained at SAAAB were placed were it not for segregation
• Victory gardens, rationing and other campaigns led on the home front

The SAAAB Story is a permanent exhibit at Heroes Hall. Heroes Hall is open year-round, Wednesdays through Sundays from 10 a.m. to 4 p.m. Admission is free.