Through Their Eyes: Artwork by Active Military and Veterans

Juried show featuring artwork by 23 U.S. military veterans from Southern California. These artists have expressed their individual experiences through a variety of mediums including sculpture, photography, painting, carving and woodworking. The artists’ subjects are as unique as the artists themselves and range from combat scenes to flowers, and from landscapes to surreal portraits. Though their artwork varies by subject and individual perspective, one thing unifies them: they have all served in the U.S. Armed Forces.
>> Read more about the exhibit

A Vietnam-era A-4M Skyhawk aircraft has been relocated from the Santa Ana Civic Center to Heroes Hall. The aircraft is on loan from the National Naval Aviation Museum in Pensacola, Fla.
>> Read more about the aircraft and see photos of its transport

The Medal of Honor Courtyard and Orange County Walk of Honor

The Medal of Honor Courtyard and Orange County Walk of Honor are tributes to veterans from Orange County who received the highest honors that the United State government bestows for acts of valor and heroism.
>> Read more about the plaques and tributes

Heroes Hall Virtual Museum is a place where residents from Orange County and surrounding areas can share photos of veterans and military memorabilia that holds meaning for them.
>> See the Virtual Museum

The SAAAB Story exhibition celebrates the history of the flight training center, its contribution to the war effort, the airmen that served here and its role in the development of the growth of Orange County through film, photographs, maps, oral histories, works of art, and ephemera. Located on the second floor of Heroes Hall.

The newest exhibit at Heroes Hall focuses on the World War II watercolor paintings of Private Charles J. Miller. The exhibit is the visual diary of Miller, who chronicled his military service in the South Pacific theater during WWII. Miller was a self-taught artist who had been drawing throughout his lifetime, teaching himself perspective, anatomy and drawing and painting techniques.
>> Read more about the exhibit

The newest exhibit at Heroes Hall will focus not on the battlefield, but on stateside messages of persuasion, the propaganda posters of World War II. Some 28 posters are featured in the Fighting on the Home Front: Propaganda Posters of World War II exhibition that is on loan from the Detroit Historical Museum.
>> Read more about the exhibit and view a sampling of the posters

Victory From Within: The American Prisoner of War Experience
(January 2019 – September 2019)

Freedom does not come free. No one knows better what it is like to have their freedom stripped from them than those who became prisoners of war while serving their country. Victory From Within: The American Prisoner of War Experience is a traveling exhibit created by the National Park Service. It explores the lives of POWs and features four key themes: capture, prison life, those who wait, and freedom.

Soldiers may never forget what it’s like, but it’s not always easy to describe. With the virtual reality technology of Bravemind, you can see what they’ve seen, feel what they’ve felt, and fear what they’ve feared – all within the safe confines of an exhibition at Heroes Hall. Bravemind, created by USC Institute for Creative Technologies, uses VR to not only immerse viewers into the world of a soldier at war, but to help those in need. Using established therapeutic techniques, Bravemind can help veterans come to terms with PTS symptoms, and the technology can also be used for resilience training prior to deployment.

U.S. Army Public Affairs Specialist Kimberly Millett spent two deployments documenting the Iraqi War. Through photographs and commentary, Millett’s Operation Iraqi Freedom exhibition is an unbridled look at her interactions with Iraqis, the generals in charge of the war and the military fighting it. Rather than recording the violence of military confrontation, Millett highlights the times between conflict, when it is safe to show some intimacy and humanity.

The Things They Carried is loosely based on the book by Tim O’Brien and offers a glimpse into veterans’ personal experiences of war. Working in conjunction with local veterans groups, the stories of Orange County veterans are gathered and told through the personal objects they carried into conflict. Some stories from the book The Things They Carried will be added to the exhibition and members of the community will be invited to share their experiences as well, especially veterans from the Gulf War. The exhibition will consist of the objects that individual veterans carried with them as well as film, audio, photography, text and art. 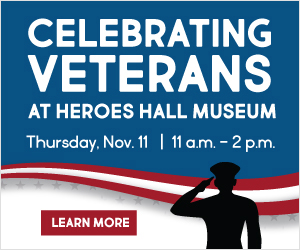