Through Their Eyes: Artwork by Active Military and Veterans

Through Their Eyes: Artwork by Active Military and Veterans is a juried show at Heroes Hall featuring artwork by 23 U.S. military veterans from Southern California. These artists have expressed their individual experiences through a variety of mediums including sculpture, photography, painting, carving and woodworking. The artists’ subjects are as unique as the artists themselves and range from combat scenes to flowers, and from landscapes to surreal portraits. Though their artwork varies by subject and individual perspective, one thing unifies them: they have all served in the U.S. Armed Forces.

Heroes Hall Museum is dedicated to honoring our service members and providing a place where they can tell their stories. For this exhibit, our military service members have conveyed their personal experiences through use of color, perspective, texture and distinct style.

Through Their Eyes was underwritten by the Heroes Hall Veterans Foundation. The judges were Dave Barton, Fatemeh Burnes and Denton Knapp.

Kurt Bayless, U.S. Navy, of Huntington Beach
Bayless served in the U.S. Navy from 1963 to 1969 (active reserve and active duty), and received a B.S. degree in Business Marketing in 1971 from Long Beach State University. He worked in purchasing, material logistics and product planning for 42 years in four industries: oil and gas, automotive, aerospace and career education. Bayless joined the Photographic Society of Orange County in 2010, was appointed to the board of directors in 2012, and served as president for three years from 2015 to 2017. 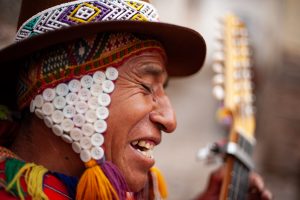 Giovanni Berdejo, U.S. Army, of Fountain Valley
Berdejo has been a professional photographer for five years, specializing in portraits and child photography. He’s an Operation Enduring Freedom Veteran and served with the 349th Combat Support Hospital, under the 101st Airborne Division, in Forward Operating Base Salerno, Afghanistan. Berdejo also taught photography workshops for student veterans at Chapman University, under the guidance of Dr. Lindsey Shen, and is the author of “One Angry Veteran,” a book about transitioning from the battlefield to the homefront. 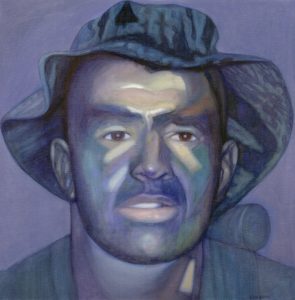 Ed Bowen, U.S. Army, of Corona Del Mar
Bowen was a U.S. Army Combat Artist in the Vietnam War in 1969. He was one of 46 Army artists selected to create artwork depicting the military during the war. The artwork we created became part of the Army’s war art collection and is displayed in various government facilities including the Pentagon and the Smithsonian. Bowen graduated from USC with a Bachelor of Fine Arts in 1966. After the war, he returned to USC to earn his Master of Fine Arts in 1971.

George Davis, U.S. Marine Corps, of Rancho Santa Margarita
Davis started drawing in grade school and went on to study architecture and design. He then entered the U.S. Marine Corps and served in Vietnam. When he got out, he went back to college as an art major with a minor in design. Davis has worked in design, automation and robotics, and is now retired.

Hanh Dinh, U.S. Marine Corps, of Garden Grove
Dinh was born and raised in Garden Grove. During the last four years, she served as an ammunition technician in the U.S. Marine Corps. This gave her the opportunity to live in Okinawa, Japan, for two years and also visit parts of mainland Japan and the Philippines. Dinh enjoys practicing calligraphy, watching the sunset at the beach, and exploring new food spots in Orange County.

Reginald Green, U.S. Navy, of San Diego
Green was born and raised in Dallas, Texas, and is a 15-year medically retired Navy veteran. He got into art to heal, explore creativity and to do something positive and productive to shift focus off his highly debilitating migraines, headaches, depression and lower back pain, which he acquired from my active-duty service. Prior to finding VETART, Green took it upon himself to learn the basics of molding, painting and sculpting. Green is a VETART instructor and currently teaches classes at the ASPIRE Center, the V.A. in La Jolla, and at the VETART School of Foundry in Fallbrook.

Linda Hicks, U.S. Air Force, of Westminster
Hicks joined the U.S. Air Force in 1968 and served during the Vietnam era. She completed eight years of active duty and retired as a Master Sergeant from the Reserves after 21 years. Hicks had five career fields: Aircraft Control and Warning, Administration Technician, Personnel Specialist, Human Relations Instructor and Legal Services Technician, plus several jobs as a civilian while raising her two sons. Hicks graduated from California State University Long Beach with a B.A. in Art.

Sean Lenahan, U.S. Navy, of Costa Mesa
Lenahan served as a Mass Communication Specialist 1st Class for 12 years as an active-duty sailor and is currently in his seventh year as a Navy Reservist. His experience includes research, print preparation, broadcast journalism, feature news stories, recording still and video photography, and creating graphics in support of public affairs missions. Lenahan is currently the lead Training Officer for NPASE West located at the North Island Naval Base in Coronado, and a a Lead Interactive Designer for the Learning Experience Department at PADI Americas.

Phyllis Miller, U.S. Navy, of Santa Monica
Miller is a Vietnam-era Navy veteran who finds guiding therapeutic art groups for the veteran community especially rewarding. A number of her creations have been featured in interior art placements, restoration projects and mural commissions. Inspired by outdoor vistas, much of Miller’s artwork features unusual landscapes where she highlights nature’s graceful beauty.

Kimberly Millett, U.S. Army, of Newport Beach
Millett served five years in the U.S. Army as a journalist. Her first tour was in Iraq with the 89th Military Police Brigade as their public affairs specialist. She captured the unit’s activities, their work training the Iraqi police, and memorial services. During Millett’s second tour, she was General Ray Odierno’s photographer and traveled around Iraq and other Middle Eastern countries documenting meetings with unit commanders and their troops, politicians, local leadership and the general public during market walks.

Darrow Minor, U.S. Navy, of Long Beach
Minor served in the Navy for three and a half years. He was an engineer at the Mayport Naval Station in Florida and achieved the rank of E-6. Minor also attended the Merrick Studios Motion Picture Training in Hollywood, and worked for the next 27 years for multiple television episodic and motion picture film studios and commercials.

Cody Reed, U.S. Navy, of Long Beach
Reed was born and raised in Ontario, graduated high school and joined the U.S. Navy at 17 as an Aviation Structural Mechanic. He worked mainly on various F/A-18C aircraft. Reed served for five years with VFA-34 stationed out of Virginia Beach, Virginia, and served during three deployments while reaching the rank of 2nd Class Petty Officer.

Arthur Rivera, U.S. Navy, of Anaheim
At 18 years old, Rivera enlisted in the U.S. Navy. After boot camp he was sent to quartermaster school and then assigned to the USS Dashiell DD659. In early 1953, his squadron was assigned to escort the carrier USS Lake Champlain during the Korean Conflict. Rivera fought in Wonsan Harbor doing shore bombardment. Because he had been hit, he was in Sasebo, Japan, for repairs when the war ended.

Abraham Romero, U.S. Army, of San Diego
Romero was born in 1984. He is an Army veteran and Chicano artist. Romero earned a Master of Fine Arts degree, with an emphasis in Painting and Printmaking, in 2018.

Casey Rydjeski, U.S. Army, of Costa Mesa
Rydjeski joined the U.S. Army Infantry in November 2009, was stationed in South Korea after Infantry School, and then moved to Fort Riley, Kansas, a year later. He trained as a dog handler in the Tactical Explosives Detection Dog program, about which he is writing a book. Rydjeski and his partner, K9 Fantom, earned the prestigious Combat Infantryman’s Badge for fighting in close combat with enemy forces.

Sandra Scott, U.S. Air Force, of Yucaipa
Scott is a single mom, respiratory therapist, and U.S. Air Force veteran. She started painting about four years ago. Scott uses acrylic, gouache and watercolor, and likes to experiment with texture. She recently went back to college to finish her degree.

Mario Solorzano, U.S. Army, of Pomona
Solorzano joined the U.S. Army just days after his 17th birthday and one month after 9/11. In the military, along with his fellow soldiers, he learned about growing up and discipline. Solorzano started painting pet portraits three years ago but really got into it after COVID-19 hit. Since then he has experimented with glow art, functional art, watercolor and acrylic.

Bill Stewart, U.S. Air Force, of Newport Beach
Stewart enlisted in the U.S. Army Air Corps in September 1946. He was stationed on Guam and Japan, where he worked as an auto mechanic and radar repairman. After leaving active duty, he joined the Active Air Force Reserves and used his GI Bill to pursue a degree in electronics. Stewart was recalled to active duty during the Korean War and was sent to Morocco. After the war, he earned a degree in accounting and worked for several large companies including Price-Waterhouse, Hoag Hospital and Ford Aeronutronics. Stewart went on to run a Catalina boat business and built hydrofoil boats; he restored and transported Franklin D. Roosevelt’s presidential yacht from Barbados back to the United States, where it is now a museum in Oakland. Stewart is the veteran and nautical advisor for the Balboa Island Museum in Newport Beach.

Gary Tegel, U.S. Navy, of Costa Mesa
Tegel enlisted in the U.S. Navy and entered boot camp in March 1981, and served for four years on active duty. After leaving active duty, he joined the Navy Reserves and served another 23 years, on nine ships, including a tour in Iraq. He started making plaques for veterans, since many that served short tours received nothing upon departure from the service.

Paul Todd, U.S. Army, of Orange
Todd is a 74-year-old retired public school teacher and administrator. Todd says, “My life now, as always, is full of family, reading, writing, nature, and now as a volunteer docent at Heroes Hall.” He was in the U.S. Army and in Vietnam (Arty Hill, Pleiku) from 1971 to 1972. 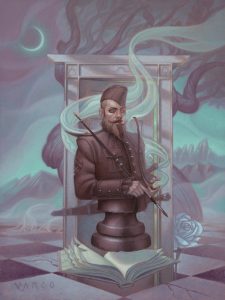 David Vargo, U.S. Marine Corps, of Anaheim
From an early age, Vargo’s art sought to transcend realism to the realms of the imagination. After serving in the U.S. Marine Corps as an infantryman, he enrolled in art school and earned a Bachelor of Fine Arts in Illustration from the Laguna College of Art and Design and later earned a Master of Fine Arts in Illustration from California State University Long Beach. He has painted illustrations for companies like Blizzard Entertainment, Arch Enemy Comics, Lucasfilm and Wizards of the Coast, and is currently an art professor at the Laguna College of Art and Design. Vargo says, “My love of the mysterious combined with my passion for the figure has led to a long-term art affair with imaginative realism.”

George Wallims, U.S. Marine Corps, of Huntington Beach
Wallims entered the U.S. Marine Corps right after high school and began boot camp at Marine Corps Recruit Depot San Diego on June 2, 1964. Upon completion of boot camp, he went to Jacksonville, Florida, for aviation electrician school, and spent the next eight years as a reservist at NAS Los Alamitos. Wallims became Staff Sergeant in charge of the Avionics Department, working on the A-4 jets.

The results of the jurying will be sent to all submitting artists via email. Selected artists will be instructed on how to proceed and are required to agree to all terms outlined by the museum. Accepted artists are responsible for transportation or shipping costs to and from the museum.