Fighting for the Right to Fight: African American Experiences in World War II 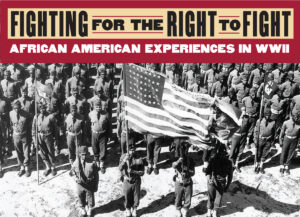 On Feb. 16, 2022, Heroes Hall Museum opened a new special exhibit called Fighting for the Right to Fight: African American Experiences in World War II. Produced by The National WWII Museum, the exhibit features artifacts, photographs and oral histories to highlight some of the extraordinary achievements and challenges of African Americans during World War II, both overseas and on the Home Front.

In the years before World War II, African Americans in many parts of the country were treated as second-class citizens. Discriminatory practices were condoned by the government, and African Americans were systematically denied many rights and liberties by laws that kept them in positions of inferiority. Due to the landmark Plessy v. Ferguson Supreme Court decision in 1896, the United States was a nation where “separate but equal” was law in many states. In addition, many military leaders declared African Americans unfit to serve in combat. However, once the war began, thousands rushed to enlist, determined to fight for freedom, while still being denied equality at home.

On display through September 16, 2022, Fighting for the Right to Fight illustrates how hopes for securing equality inspired many to enlist, the discouraging reality of the segregated non-combat roles given to black recruits, and the continuing fight for “Double Victory” that laid the groundwork for the modern Civil Rights Movement.

Fighting for the Right – Speaker Series

Heroes Hall Museum presents the final installment of the Fighting for the Right to Fight Speaker Series. Presentations in this series focus on the tremendous achievements and challenges Black service members and other groups have faced while serving in the U.S. armed forces, and is hosted in conjunction with the museum’s newest exhibit, Fighting for the Right to Fight: African American Experiences in World War II.

Reservations are limited. Please RSVP for each event using the links below.

The Formation of the Tuskegee Airmen: First Black Fighter Pilots of WWII 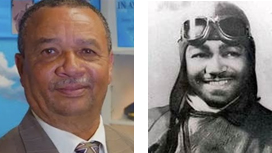 Chauncey E. Spencer II is the son of Chauncey E. Spencer, who helped bring about the formation of the Tuskegee Airmen, the first Black fighter pilots to serve in the US Armed Forces. Chauncey II is the former President of the Tuskegee Airmen, Inc., Central Region, and a member of the Detroit Chapter Speaker’s Bureau. Since 2005, Chauncey Spencer Project has helped advance the public’s understanding of the history of African Americans in aviation. His youth aeronautical program and traveling museum bring STEM education to at-risk students around the country.