Heroes Hall Virtual Museum is a place where residents from Orange County and surrounding areas can share photos of veterans and military memorabilia that holds meaning for them.

Those Who Served in the Korean War

This section tells the stories of local veterans who served in the Korean War. Veterans are listed in alphabetical order by last name.

Wayne T. Hogancamp was born on Aug. 18, 1918, in Bardwell, Kentucky. He was drafted into the U.S. Army in 1940 prior to the bombing of Pearl Harbor. In 1942 he was selected for officer candidate school and received heavy machinery maintenance and artillery training. He then spent three months in Arizona on Africa desert maneuvers before being shipped to the South Pacific in 1943, where he served as an infantry cannon unit commander and executive officer. He spent the next two and a half years island hopping in the South Pacific with the Cannon Company, 305th Infantry, 77th Infantry Division. Hogancamp was awarded the Silver Star for his gallantry in action during a mission in Leyte, Philippines in January 1945, and the Bronze Star for heroic achievement during a military operation in the Kerama Islands in March 1945. He separated from the Army on Feb. 9, 1946.

During the Korean War he re-enlisted and served from November 1950 to April 1951 as a training officer in Washington. After leaving the service, Hogancamp moved to Los Angeles, eventually settling in Gardena, where he worked as a tool and die maker and a business owner for 30 years. He and his wife Lillian had three children. Hogancamp died in his sleep on Nov. 3, 2012, at the age of 94.

Bernard Stein was born on June 6, 1921, in New York City. After completing his bachelor’s degree in accounting at New York University in 1942, he joined the U.S. Army Air Corps during World War II. He attended pre-flight training at the Santa Ana Army Air Base. Due to a health issue, he was not deployed overseas. After World War II, Stein became a building contractor and developed homes in Queens, New York, but he wanted to return to military life. So he reenlisted in the U.S. Air Force and in 1950, and was stationed in England.

During the Korean War, he was stationed in Okinawa, where he served as radar operator on the B-29 bomber “Command Decision,” named for the popular film about bombers during WWII. Stein’s B-29 bomber was the most-highly decorated bomb crew of the Korean War. They were called the “MIG Killers” for having shot down five Soviet-made MIG fighters during their bomb runs over North Korea. For his role in their successful missions, Stein received the Air Medal with 3 Oak Leaf Clusters. The nose art on their plane was Dopey and Doc, from Disney’s “Snow White and the Seven Dwarfs,” flipping a coin. The fuselage of the plane is on display at the U.S. Air Force Museum at Wright-Paterson AFB in Dayton, Ohio.

After Korea, Stein remained in the military and served as a navigator on B-47 bombers at various bases throughout the country as well as in Morocco. Upon his return to the states in 1962, he was assigned to the Atlas missile system at Forbes AFB in Kansas. He later became a base administrator at bases in Nebraska and Washington, until his retirement in 1967 at the rank of major. Stein was married to Iris Trueheart for 52 years until his death on Dec. 9, 2003. They are buried together at Arlington National Cemetery, and are survived by two sons.

Photos below were submitted by veterans featured above. This gallery includes photos of uniforms, medals and other recognition these veterans of the Korean War received. 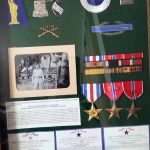 Ribbons, medals, patches and citations awarded to Lt. Wayne Hogancamp for his service in the U.S. Army during WWII and the Korean War. 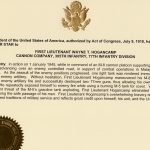 Silver Star citation for Lt. Wayne Hogancamp for gallantry in action during combat operations in Leyte, Philippines, during WWII. 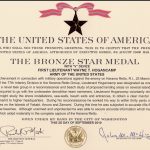 Bronze Star citation for Lt. Wayne Hogancamp for heroic achievement during operations in the Kerama Islands during WWII.

Photos below were submitted by veterans featured above. This gallery includes photos of war correspondence and publications. (Click thumbnail to view)

On the Battle Ground

Photos below were submitted by veterans featured above. This gallery includes photos taken during the Korean War, on location. 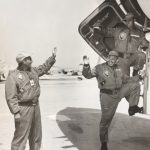 Climbing into his B-47, Cpt. Bernard Stein was part of the 442nd Bombardment Squadron. He was stationed at Air Force bases in California, Kansas, and Morocco. 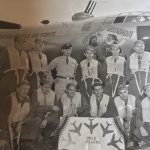 Lt. Stein (back row, far left) was the radar operator on “Command Decision,” the B-29 dubbed the “MIG Killers” for downing five Soviet-made fighter jets during their bombing runs over North Korea. 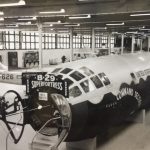 The B-29 “Command Decision” exhibit at the U.S. Air Force Museum at Wright-Paterson AFB in Dayton, Ohio. This is not the actual fuselage from the original plane but was taken from another B-29.

Heroes Hall Virtual Museum is a place where residents from Orange County and surrounding areas can share photos of veterans and military memorabilia.