Centennial Farm is home to several farm animals, including pigs, goats and cows. Read all about them below. Centennial Farm is home to two oxen, which are permanent residents. Oxen are cattle that have been trained to work; it is just a job title for them, similar to a firefighter or a doctor. Oxen can be any breed or gender of cattle and they are used for a variety of jobs including pulling logs out of a forest or tilling fields to prepare them for planting. Oxen were widely used on the Oregon Trail in favor of horses because of their hardiness, requiring a less specialized diet, and having the ability to pull much heavier loads.

Other permanent residents of Centennial Farm are our pair of peafowl. Peafowl is a general term for both male and females of the specie. Males are specifically referred to as peacocks and females are peahens. Peacocks are the more brightly colored and possess the long, shimmery tail feathers the specie is known for. Peahens are often much more subdue in color, reason being they want to be able to camouflage into the landscape from predators while protecting their babies after they hatch.

Peafowl are a more ornamental type of bird, but they also can have a job on the farm as guard animals. Peafowl have a loud call they make when they see predators or strangers entering your property.

Chickens
In our chicken coop you will find a variety of standard breed chickens including Rhode Island Reds, Plymouth Rocks and Leghorns. You will also see a standard backyard setup of a chicken coop with nesting boxes where the chickens lay their eggs, a roost for them to perch on at night and feeders and automatic waterers.

To aide in our educational programs, Centennial Farm also purchases chicks, which sometimes may be on display for the public.

Rabbits
In our rabbit hutches you will see three different breeds of rabbits. Rabbits come in more than 45 different recognized breeds varying in body type and weight.

On display at Centennial Farm you will typically find a dwarf breed, a lop breed (floppy ears), and a meat breed.

Goats
Goats have three main uses which are their meat, milk and fiber. At Centennial Farm we showcase different breeds of goats based on their uses.

Make sure to come visit in the spring time when you can see the young goats kids frolicking around with their mothers.

Sheep
Sheep have two main uses: their meat and wool. Sheep can also be used for their milk, but the breed of sheep used for this purpose is not a popular breed readily found and does not produce large quantities of milk making it not economical for farmers.

Typically you will find Suffolk cross sheep at Centennial Farm, which are one of the most popular varieties of sheep used for their meat. They also produce wool which is shorn off of them once a year in the spring time.

Pigs
A popular sight at Centennial Farm is our pigs! Pigs can be bred year-round, which is why you will almost always see a litter of piglets at Centennial Farm. We have three farrowing pens which is where the female pigs, also called sows, are housed prior to giving birth and when raising their piglets. These pens are specially designed to be able to provide a comfortable environment for the sow with added safety measures for the small piglets.

Don’t forget to check out our Pig Cam where you can see what our little piggies are up to 24/7.

Cattle
In addition to our oxen, Centennial Farm also houses cattle in our Century Barn. You will be able to find a variety of dairy cattle including Jerseys and Holsteins which are used for milking demos for our educational tours. 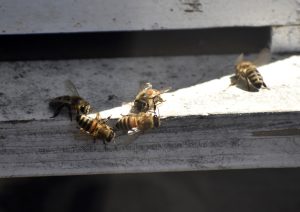 In the back of our garden area you will find a bee hive maintained by the OC Beekeepers Association. Bees are vital to the agricultural industry as they pollinate plants for farmers. Without bees many of the produce we eat would never be able to grow!

In addition to pollinating, bees produce honey which is a great sweetener alternative in meals and drinks.

Our animal landscapers are located on the berm around Pacific Amphitheatre from March through July and September through December. Most of the team will be at the farm in January, February and August. 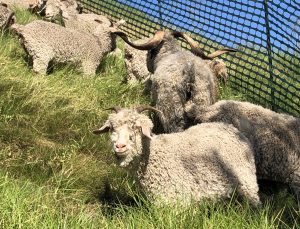 They are quite the sight at OC Fair & Event Center, a herd of 18 Angora goats chomping away at weeds while their trusty guards – miniature donkeys, a llama named Knitty and a Maremma livestock guard dog named Mossy – keep watch.

The animals are hard at work solving problems by clearing weeds and improving the soil on the berm around Pacific Amphitheatre.

“The berm is a challenging area for our landscaping crew and the goats are the perfect solution, but we do have some coyotes around the property so the two miniature donkeys will help protect the herd,” said Barbara Gregerson, OC Fair & Event Center’s Landscape Supervisor. “Not only will the goats and donkeys eat the vegetation, they will fertilize and break up the soil, preparing it for planting.”

Gregerson developed the animal landscaping program to reduce erosion, maximize water filtration and improve the resilience of the soil. Once the soil improves, the ultimate goal is to create a diverse habitat of California native plants that invite birds, butterflies and other pollinators. 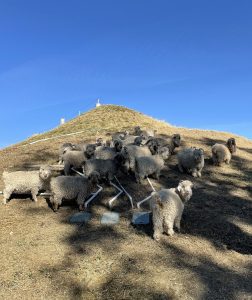 The berm has been divided into quadrants where the animals will be rotated to evenly work the land. In addition to the weeds and grasses on the berm, the goats will have shelter, water and supplemental feed to ensure they are getting a well-rounded diet. They will also receive regular veterinary care like the animals that reside year-round at nearby Centennial Farm.

The goats and miniature donkeys are on loan from Eureka Mohair Farm in Tollhouse, a longtime competitor in the annual OC Fair livestock competitions. They will be on the property  from March through July and September through December.

The annual cost of the program is almost the same as using traditional landscapers. There were fencing and shelter costs to get the program up and running and OC Fair & Event Center will cover feed and veterinary care for the animals in exchange for their labor.