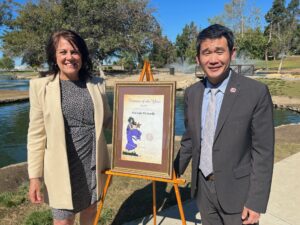 a year, including entertainment at the world class Pacific Amphitheater, and attracts approximately 4.3 million guests annually. It is an economic driver for Costa Mesa that generates $300 million for the region.

“On behalf of the 1.1 million residents here in California’s 37th Senate District, I am honored to recognize Michele Richards as the 37th Senate District 2022 Woman of the Year,” Min said. “Michele Richards is not just the General Manager and CEO of the Orange County Fairgrounds – she is a pillar of the Orange County community.” Min continued, “Since the onset of the pandemic, Ms. Richards’ stewardship not only steered the Fair’s financial recovery but leveraged its shuttered facilities for COVID-19 response. From food distribution center to vaccine supersite, we are incredibly grateful for her leadership.”

“I’m beyond honored to be named by Senator Min as Woman of the Year,” Richards said. “There are many exceptional women leaders in our community and it is a great privilege to be counted among them. I am surrounded by an amazing team at OC Fair & Event Center. What we do is important to the community, and to be able to help so many people during the pandemic and bring back the OC Fair has meant so much to all of us. Thank you for this recognition.”

Ms. Richards’ full bio can be found below.

Michele Richards was named OC Fair & Event Center’s General Manager and CEO in December, 2019 where she has led the organization through the pandemic and eventual recovery. Michele took the helm at a critical time just before the pandemic shut down all public access and revenue-generating event business at OC Fair & Event Center, including the 2020 OC Fair. Working with the employees she credits as being the heart of the team, Michele led the organization back to financial stability with the reopening of public events and return of the 2021 OC Fair, the most successful in the fair’s history. During the shutdown, Michele worked with state, county and local government agencies and nonprofits to host emergency food distribution events and COVID testing, and used the OC Fair & Event Center as a vaccination Super POD to serve the community. Prior to being appointed CEO, she served as Vice President of Business Development for more than seven years. Most notably, she was responsible for guiding initiatives which significantly increased attendance at the annual OC Fair, launching new sales programs which generated additional year-round events revenue, leading a rebranding effort and advancing the organization’s youth STEAM event, Imaginology.