You are invited to a wedding at the OC Fair! - OC Fair & Event Center - Costa Mesa, CA
Skip to content

Home » About Us » What’s New» You are invited to a wedding at the OC Fair!

You are invited to a wedding at the OC Fair!

Where: In front of Millennium Barn during the OC Fair

The winning couple of our Love is in the Fair wedding contest have been chosen and they’ll say “I do” in front of 20 of their guests — plus the entire OC Fair! The wedding will take place at 1 p.m. on Aug. 10 and will include the ceremony, special entertainers and an unforgettable OC Fair experience. 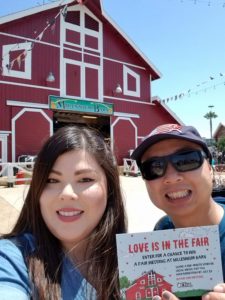 Professions: Leslie is a veterinary assistant/nursing student; Michael is a behavior analyst for children with autism

How/when did you meet?

“In 2002, we met online in a music chat room, where Michael was trying to promote his high school band. We were internet friends for a long time. We didn’t meet in person until college. We lost touch for awhile but reconnected through social media and started dating four years ago.”

What do you like to do as a couple?

Tell us about your engagement.

Michael: “I had several plans since January of this year, but our vacation plans kept getting cancelled for various reasons. On July 1, the day before our 4th anniversary, I decided I didn’t want to keep postponing it because it didn’t matter if we were on a mountain or by the ocean, as long as we were together. I cooked her dinner. Afterward, I let her “open her anniversary gift” early. Leslie collects rocks and crystals, so I hid the ring inside of a geode. After a short engagement, we finally got to take a short camping vacation. When we got reception, we learned we had won the contest!”

Why is the OC Fair special to the two of you?

“Our anniversary is July, so the OC Fair was one of the first public places we attended as a couple. We’ve been every year since 2015.”

What was it like trying to pull this all together in just a week?

Michael: Vows are “til death do us part” and we managed to not kill each other.

Leslie: It’s been stressful trying to get everything put together in a week, there’s so much to do and so many phone calls to make!

What do your friends and families think of this unusual wedding?

“Our family is more traditional so they think we’re crazy. Our friends say it’s a perfect fit.”