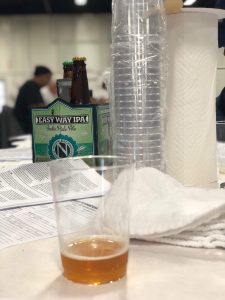 The heat is on for the 2018 OC Fair competitions!

Judging for the 31st annual Homebrew Competition was held May 19-20, and with 367 entries and 500 bottles of homebrew entered, the judges had plenty of beers, mead and ciders to sample. Under the guidance of the competition organizers and the Barley Bandits, all of the judges are Beer Judge Certification Program (BJCP) certified and are able to earn experience points.

“All beer tasting competitions and contests should be backed by a certification program in order to allow for standardized rules and structures,” said Ashley Ramos, one of the organizers of the competition and an OC Fair employee. “The BJCP gives as a resource to find educated, professional judges to judge our competition.”

The 80 returning and new judges use the BJCP Style Guidelines to evaluate 34 types of beer; however, there were not as many types of beer six years ago.

“People started homebrewing because there wasn’t a lot of variety at the store,” said Bryan Dietz, a returning judge. “Homebrew has paved the way for craft beers.” 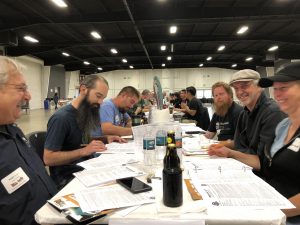 Each competitor brings in three bottles of beer and is given an anonymous code, and a group of four to five judges drinks the same beer. Judges use a beer fault list (provided by BJCP) to judge 21 characteristics, including aroma and estery. They also determine if the beer tastes sulfury, or like rotten eggs or burning matches, which would signify that the beer is infected by yeast health or yeast autolysis. These characteristics determine if the beer moves on in the competition or is cut short. The beers that move on in the competition are entered into the Best of Show round and are put back in the fridge for reconsideration.

“Judging homebrewed beers is a lot like judging a dog show. I may like the dog, but does the dog fit the set definitions that could make it a winner?” Dietz said.

The judging events also include stewards that clear and serve beers, and refill bread baskets for palette cleansing, as well as perform several other duties.

“There are many parts to homebrewing, like cooking,” Dietz said. “The goal is to get the perfect combination of flavors to make the best recipe.”

Since becoming one of the main organizers of the OC Fair Homebrew Competition a decade ago, Spencer Coleman has seen several changes in the homebrew industry.

“The beers have gotten much better since the increase of educational recourses that are available to brewers,” Coleman said. “The whole beer industry has changed, and there are more breweries since the pre prohibition era.”

There are plenty of aspects that homebrew competitors are competing for. Besides an award, competitors can also win tickets to this year’s OC Brew Hee Haw, held July 14-15 this year. Winners are awarded first place, second place, third place, or an honorable mention.

Winners will be announced on Friday, July 13. Check ocfair.com/competitions for winners.