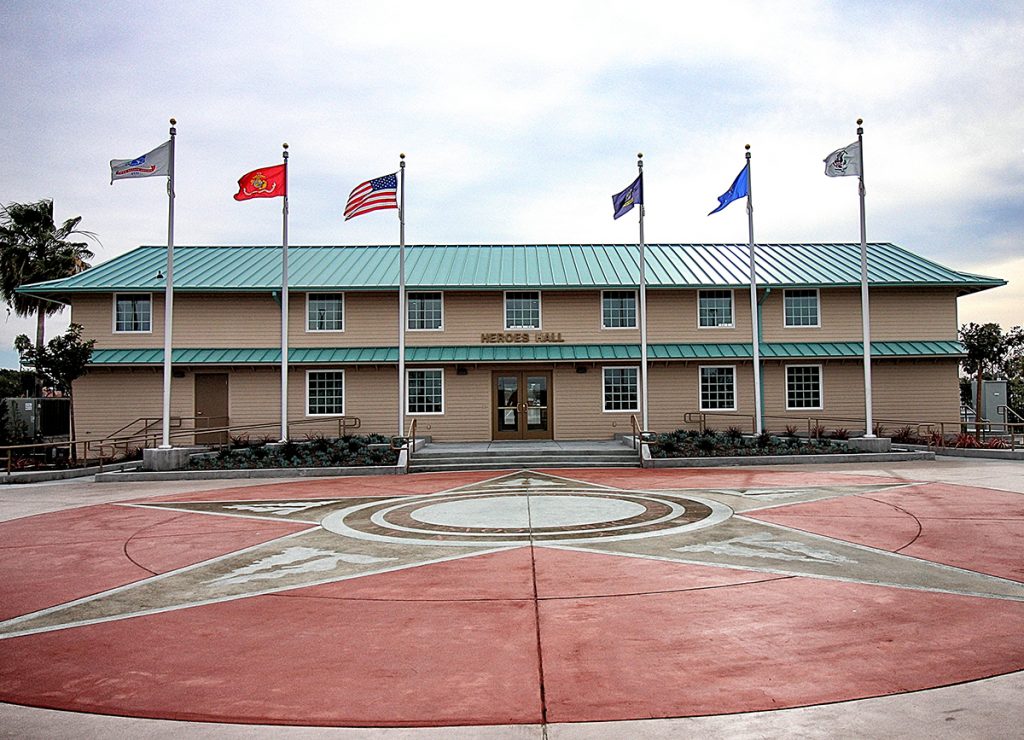 Today Heroes Hall Museum & Education Center celebrates its 5th birthday as well as the 80th anniversary of the Santa Ana Army Air Base (SAAAB), which operated in Costa Mesa during World War II.

Since opening its doors on Feb. 15, 2017, Heroes Hall Museum has been committed to honoring our nation’s military veterans and giving voice to their remarkable stories. Through thought-provoking exhibits such as Bravemind – about the impacts of post-traumatic stress on service members – to Voices: Veterans Storytelling Project and our Veterans Day celebrations, Heroes Hall has educated and inspired thousands of visitors.

Heroes Hall is also home to the permanent exhibit The SAAAB Story, which depicts the history of the Santa Ana Army Air Base through artifacts, stories, and photographs. SAAAB was a preflight training center for pilots, navigators and bombardiers during the World War II. Many of the artifacts on display were donated by local families whose relatives served at the base.

“In our exhibit we strive to keep the stories of the SAAAB airmen alive, many of whom went on to fight with honor in the European, Pacific, and China-Burma-India theaters of operation,” said Carol Singleton, Supervisor of Heroes Hall Museum. “Tragically, many of them died or became prisoners of war. Others returned home injured both physically and psychologically.”

The base, which opened on Feb. 15, 1942, stretched over 1,300 acres and contained more than 800 buildings. The creation of the base forever changed the character of the region from a quiet agricultural community to a busting urban center. The aerospace industry also flourished in the area during World War II.

After the war, the land that occupied the base was sold off to various entities including Orange Coast College, the city of Costa Mesa, and the Orange County Fairgrounds. Many of the barracks buildings were sold to service members returning from the war. The structures were dismantled and rebuilt as homes for veterans.

The building that houses Heroes Hall Museum is one of the last remaining barracks from SAAAB. It was rescued from demolition by the Fair Board of Directors and local veterans organizations who recognized the value in creating a museum dedicated to the stories of our military heroes. After being moved from one area of the fairgrounds to its current location between Centennial Farm and the Pacific Amphitheater, it underwent a complete renovation prior to opening its doors in 2017.

In 2019, Heroes Hall was the recipient of an A-4M Skyhawk, a Vietnam-era attack aircraft that was previously on display in downtown Santa Ana. The city was expanding its Civic Center and needed to find a new home for the jet, and Heroes Hall was happy to comply. Today the aircraft, which is on loan from the National Naval Aviation Museum in Pensacola, Florida, sits on a large pedestal near Heroes Hall Medal of Honor Courtyard and Walk of Honor. The courtyard and walking path include plaques that pay tribute to dozens of Orange County military heroes, some who paid the ultimate sacrifice for their country.

“Heroes Hall Museum receives financial support from Heroes Hall Veterans Foundation and AMVETS, to whom we are very grateful. They provide funding for everything from bus scholarships for school groups to artifacts for our permanent collection,” said Singleton.