Home » About Us » What’s New» Behind the lines – behind the scenes: A new photography exhibit debuts at Heroes Hall

Behind the lines – behind the scenes: A new photography exhibit debuts at Heroes Hall 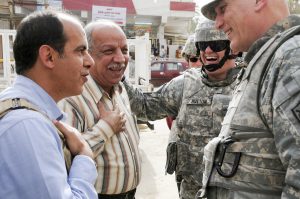 The exhibition on the first floor of Heroes Hall will feature images captured by Public Affairs Specialist Kimberly Millett while on assignment with the U.S. Army from 2006 to 2009. The exhibit is the Newport Beach resident’s first. As a graduate of UC San Diego, Millett was deployed twice to Iraq as a journalist.

Millett has previously worked in the Visual and Home Arts galleries at the OC Fair, and entered a collection of military coins in the Collections gallery. Her grandfather, William Boylhart, served at the Santa Ana Arm Air Base during WWII, and her brother, Ryan Millett, loaned Heroes Hall the military vehicles used at its opening. So it’s no surprise that she was attracted to the military.

“I had always thought of joining the military,” Millett said. “I read about basic training and boot camp and kind of liked the idea of the lifestyle before I even knew what it really was.” 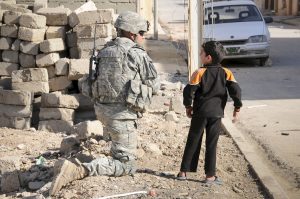 During Millet’s first deployment she provided documentation – photographs and commentary – on the 89th MP Brigade stationed at Camp Victory, Iraq, from August 2006 to November 2007.

“It didn’t feel real,” Millett said of her first tour. “But if you do anything long enough, it becomes natural.”

During her second deployment to Iraq, from August 2008 to September 2009, she was assigned to document the activities of General Raymond T. Odierno and General David Petraeus as they sought to stabilize the country so the roots of democracy could take hold.

“We toured prisons, hospitals, an amusement park, voting facilities, police stations, markets and schools,” Millett said. “One trip would take us to a modern, thriving city, and on another day we would walk through a place that looked straight out of biblical times. I built a snowman in front of the president’s place. We went to Turkey for a lunch meeting. There were lavish palaces and towns with rivers of raw sewage. Every trip was an adventure in its own way.” 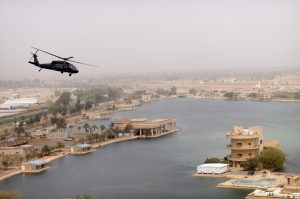 The photography exhibit features aluminum prints as well as several mementos from Millett’s tours, including Salaam the Sock Monkey, who became part of Millett’s journey and even earned a Combat Action Badge and Iraq Service Medal. The photos chosen depict outings, memorials, generals and leaders.

“My favorite part of working for the general was the battlefield circulations,” Millett said. “Once a week or so we would go to a new town and walk through the local marketplace. This gave the general (Odierno) a chance to talk informally to both businessmen and commanders about concerns. It was nice to see the country without a thick armored door between you and the people.”

Also coming up at Heroes Hall

Voices – Veterans Storytelling Project will feature local veterans sharing their stories of bravery. The evening is a culmination of a six week workshop in which veterans gathered at Heroes Hall to learn the best way to piece their stories together. Join us in supporting our local veterans at this free event on Friday, Oct. 20, at 6:30 p.m.

Heroes Hall is an exhibition hall honoring Orange County’s veterans. It opened in February 2017 and also features “The SAAAB Story” exhibit, which celebrates the history of the flight training center, as well as The Medal of Honor Plaza and the Orange County Walk of Honor, both tributes to veterans from Orange County who received high honors from the United States government. For more information about Heroes Hall, visit ocfair.com/heroeshall.